I am on the road with a documentary crew I met at The Gatsby for the Our Revolution live stream. They are working on a project to investigate local efforts towards civil engagement this election cycle and what the plans for the future are. They had met with someone in Travis County who had proof of election fraud, interviewed Tim Canova who was running for Congress, and many more interesting people across party lines. I started talking to the camera guy Matt because I noticed that he had the same Rode shotgun mic as me on his DSLR.

Long story short, we clicked as a team and once they were able to do so, they flew me out to Orlando to meet them from the remainder of the trip!

Day 1: Minutes after picking me up from the airport, we are already planning the next interview. Really dope. We met with a National Bernie Delegate who is handicapped and in a wheelchair. He recalled his experience at the DNC and their inadequate accessibility at the convention.

After that interview we met with some of the organizers for The People's White House in Daytona Beach, Florida. We filmed an interview with Don and Ben America (what a name for a political activist!). By the time we were finsished there it was already late, which put us arriving in Miami at 3:00 am. The 4 hour drive was pretty rough, but I have never been so happy to see a couch with my name on it.

The Man Behind The Woodshed

The Man Behind The Woodshed 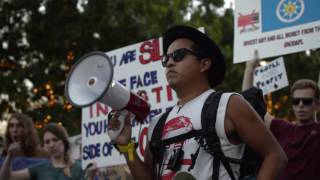